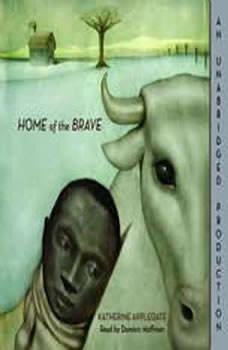 Home of the Brave

Kek comes from Africa. In America, he sees snow for the first time, and feels its sting. He’s never walked on ice, and he falls. He wonders if the people in this new place will be like the winter–cold and unkind.

In Africa, Kek lived with his mother, father, and brother. But only he and his mother have survived, and now she’s missing. Kek is on his own. Slowly, he makes friends: a girl who is in foster care, an old woman who owns a rundown farm, and a cow whose name means “family” in his native language. As Kek awaits word of his mother’s fate, he weathers the tough Minnesota winter by finding warmth in his new friendships, strength in his memories, and belief in his new country.

The Well
by Mildred D. Taylor

Another powerful story in the Logan Family Saga and companion to Mildred D. Taylor's Newbery Award-winning Roll of Thunder, Hear My Cry.For David Logan, a time of distress means taking the higher road.  During a drought, the Logan family s...

Queen is a royal pain in the neck. Her Highness treats everyone as though they were her loyal subjects: her classmates, her teacher, even her parents! When a new kid comes to Queen’s school, riding a broken bike and wearing run-over shoes, he ...

Winner of the 2016 NAACP Image Award for Outstanding Literary Work for Youth/TeensA 2016 Coretta Scott King Author Honor BookCowritten by Malcolm X’s daughter, this riveting and revealing novel follows the formative years of the man whose word...

In this middle grade novel-in-verse by the Newbery Medal-winning and Coretta Scott King Honor Award-winning author of "The Crossover," soccer, family, love, and friendship take center stage as twelve-year-old Nick learns the power of words as he wre...

Eight-year-old EllRay is down to one-and-a-half best friends, which leads his little sister to point out the obvious: he needs new friends. A spare, at least. For emergencies. So EllRay decides to audition other boys for the role of Spare Best Frien...

All the Right Stuff
by Walter Dean Myers

Paul DuPree is working at a soup kitchen in Harlem the summer his father dies, just trying to get by. But Elijah, the soup man, won't stop talking about the social contract and asking Paul questions about heavy-duty things. Paul has never thought ab...

Tears of A Tiger
by Sharon M. Draper

Coretta Scott King award-winner and National Teacher of the Year, Sharon M. Draper uses a brilliant variety of styles and voices to tell this compelling first story of her Hazelwood High trilogy. The night that changes everything in Andy's life begi...

Gerald is only three years old when his mama leaves him alone in the house while she visits her drug dealer. He finds the hot thing she uses to light her cigarettes and in no time, the house is ablaze. Mama is sent to prison, and Gerald goes to live...