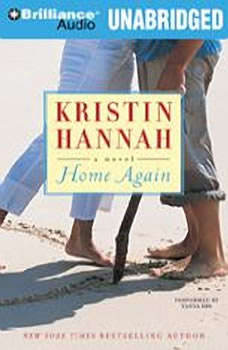 At the center of Home Again is Madelaine—a brilliant cardiologist, a loving mother, a tender friend, and a woman full of self-doubt. It is also the story of her confused and angry daughter, Lina, and of the two very different men Madelaine loves: Francis, a priest searching for his faith, and Angel, a talented but cynical man with a broken heart. When tragedy suddenly brings them all together, they must learn to forgive the betrayals of the past and find the courage to love again.“[A] memorable story of love and redemption.” —Library Journal“All the world loves Kristin Hannah.” —Newsday

After Andi Gordon is jilted at the altar, she makes the most impetuous decision of her life—buying one of the famed Three Sisters Queen Anne houses on Blackberry Island. Now the proud-ish owner of the ugly duckling of the trio, she plans to op...

Only Yours
by Susan Mallery

Montana Hendrix has found her calling — working with therapy dogs. With a career she loves in a hometown she adores, she’s finally ready to look for her own happily ever after. Could one of her dogs help her find Mr. Right... or maybe Dr...

Flowers on Main
by Sherryl Woods

When her last two plays are dismal failures and her relationship with her temperamental mentor falls apart, writer Bree O’Brien abandons Chicago and the regional theater where she hoped to make a name for herself to return home. Opening Flower...