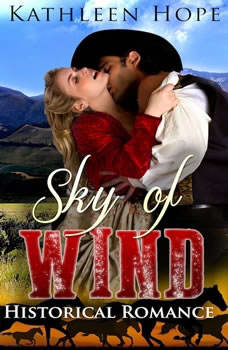 In 1885, Lavender Belle Fields lives with her parents and four sisters on Thunder Ranch in the Arizona Territory, right outside the gates of Fort Huachuca – the regimental headquarters of the U.S. Army Fourth Cavalry. Though she is past twenty, Lavender is something of a tomboy and a wild child, liking nothing better than to gallop her horse bareback into a creek filled with swimming soldiers and treating love and romance as nothing more than harmless amusement. Yet Lavender is quite the beauty when she takes the time to put on a silk dress and smooth her hair, and she has caught the eye of the strong and serious Lt. Ethan West. When Lavender's father decides to ride north in search of mustang mares for his Thoroughbred stallions, intending to raise the very finest remounts for the U.S. Army Cavalry, both Ethan and Lavender go with him – and Ethan hopes that she might learn what love really means as they undertake their long and difficult journey together.

“Yeah this definitely is your first time,” she commented. “You look like a kid with a new toy.” I stared up at her. “So am I doing something wrong?” She shook her head. “Nope.” She leaned down and ...

Dave reluctantly got to his feet, pulling Joey up as well. They ran through the rain and the storm to their cabin laughing as they got inside and tumbled onto Joey’s bunk. “Oh, we are so sleeping in yours when we’re done. Mines g...

“Who is he?” “Marco,” I gasped. “On your knees,” Charles growled. I knelt and he pushed me forward. I felt him slide into me and groaned as he began to move. Marco laid his violin on top of the piano and walked...

Twice in a Lifetime
by Dorothy Garlock

Sunset, Missouri, 1954. As hope flourishes in postwar America, a young widow dares to dream of a second chance at a forever love . . .TWICE IN A LIFETIMEClara Sinclair has learned to live one lonely day at a time. It was the only way she managed to...

I took a moment to look her over. She was pretty with her bouncy blond hair. She wasn't a natural blond, and I wondered what her original hair color was. I found myself staring at her eyes though. Two shimmering pools of green blue. A girl could dro...

Marigold Eleanor Fields is the fourth of the five Fields sisters, and has always felt like she didn't quite fit in. She is tall and thin where they are petite and pretty, and though she would like to marry she has had little attention from the men &...

“Just be gentle,” he said softly, cupping Allen’s cheek and tugging his lower lip free before kissing him again. His hand slid from Allen’s cheek to his shoulder, to his chest and the work rough thumb rubbed against a nipple ...