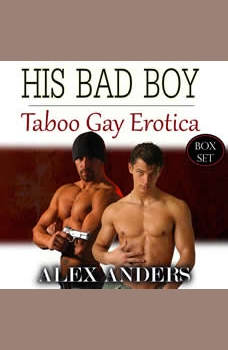 Four stories where smooth, athletic boys explore their hidden sexual fantasies with alpha males who live in their house and teach them how to take it like a man.

Playing in the Tub:

Zac steals cash and is caught by Eric, the ex-convict. Armed with his sexy, prison perfected body, Eric takes the gorgeous high school athlete into the shower and teaches him a lesson that quenches the young boy’s forbidden desires.

When Brad’s drug stash goes missing, he chases Criss into the woods. Finding the high school senior naked and submissive, the hard-bodied cop handcuffs the gorgeous athlete and fulfills both of their secret fantasies by unleashing his sadistic interrogation techniques on the sexually charged delinquent.

Chase is arrested and ‘The Sarge,’ the new man-of-the-house, uses his drill sergeant training to get the sexy 18-year-old back on the right course. Armed with a cattle prod for motivation, The Sarge humiliates the naked boy in front of the neighbors and sets him straight with a secret sexual fantasy that they both unknowingly share.