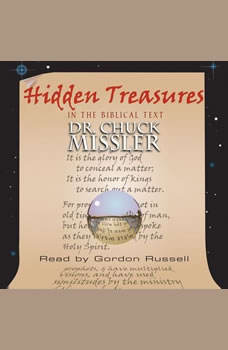 Hidden Treasures in the Biblical Text

For the novice as well as the sophisticate, this book is full of surprises. It includes subtle discoveries lying just “beneath” the text -- hidden messages, encryptions, deliberate misspellings and other amendments to the text -- that present implications beyond the immediate context, demonstrating a skillful design that has its origin from outside our space and time. Drawing upon over forty years of collecting, Chuck highlights in this study many of the precious nuggets that have become characteristic of his popular Bible studies around the world. It is guaranteed to stimulate, prove, and, hopefully, disturb. It will confound the skeptic and encourage the believer. It is a "must" for every thinking seeker of truth and serious inquirer of reality.