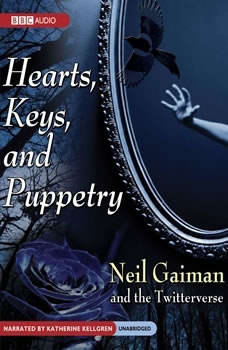 "Sam was brushing her hair when the girl in the mirror put down the hairbrush, smiled, and said, 'We don't love you anymore.'" So began the Twitter Audio project, with a dazzling first line penned by New York Times best-selling author Neil Gaiman. What followed was an epic tale of imaginary lands, magical objects, haunting melodies, plucky sidekicks, menacing villains, and much more. From mystical blue roses to enchanted mirrors to pesky puppets, this classic fable was born from the collective creativity of more than one hundred contributors via the social network Twitter.com in a groundbreaking literary experiment. Together, virtual strangers crafted a rollicking story of a young girl's journey with love, forgiveness, and acceptance. An AudioFile Earphones Award winner. An Audie Award Finalist.