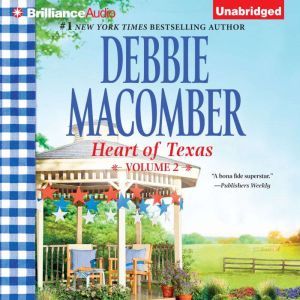 Welcome to the town of Promise, deep in the heart of Texas!Promise, a ranching community in the Hill Country, is a place with a mysterious past and a secret or two hidden under its everyday exterior. It’s also a place where family and friendship are the things that really matter….Caroline's ChildWho’s the father of Caroline’s child? Everyone in town wants to know, but no one’s ever asked—or ever will. The people of Promise are protective of Caroline Daniels and five-year-old Maggie. They care. Especially rancher Grady Weston, who’s beginning to realize he more than cares….Dr. TexasThey call her Dr. Texas. She’s Jane Dickinson, a newly graduated physician from California who’s working at the Promise clinic—but just for a couple of years. They call him Mr. Grouch. Cal Patterson was left at the altar by his out-of-state fiancée, and he’s not over it yet. Too bad Jane reminds him so much of the woman he’s trying to forget!“Macomber puts a new twist on the small-town romance.” —Publishers Weekly