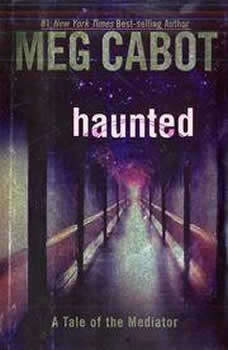 Haunted: A Tale of the Mediator

My name is Susannah Simon, and I am a mediator--a liaison between the living and the dead. If you think this gets in the way of my attempt at a normal sixteen-year-old, you'd be right. You try going to the mall while constantly being accosted by the undead.

Not that this is a bad thing all the time. Like, for example, when I discovered my bedroom is haunted by Jesse, the ghost of a nineteenth-century hottie. While I haven't made much progress with him (only one kiss so far), I remain optimistic. Jesse's inexplicable resistance to my charms is not my only obstacle, though: There's this other guy. A live one, who has the same gift of gab with the undead I have. In the same way I'm after Jesse, this guy is after me. And he knows hot to send Jesse to the Great Beyond. For good.

Allie Finkle's Rules for Girls Book Six: Blast from the Past
by Meg Cabot

Allie's excited about her class field trip. Sure, it's to a historic one-room schoolhouse, built back before there was the Internet or even cell phones, and Allie's teacher is encouraging everyone to dress up in old timey costumes, which some of All...

From the Notebooks of a Middle School Princess
by Meg Cabot

Return to the world of Meg Cabot's bestselling and beloved Princess Diaries series in From the Notebooks of a Middle School Princess...Olivia Grace Clarisse Mignonette Harrison is a completely average twelve-year-old: average height, average weight,...

Sam expected a new phone for her birthday. Instead, she got an old leather diary that was supposed to be some kind of heirloom. So, she wrote something snarky in it about the really, really great gift and tossed it aside. What was even the point of ...

Mattie is a ghost, swept away in a flood in 1922. Nate hates being stuck in a small town, away from Boston and all his friends. Mattie must find her body and only has a few days left before she is banished to the Badlands. Nate somehow can see Matti...

These are a few fictional ghost stories, which can create horror and thrill for the readers..

Royal Wedding Disaster: From the Notebooks of a Middle School Princess
by Meg Cabot

You are invited to a Genovian Royal Wedding in this second audiobook pulled FROM THE NOTEBOOKS OF A MIDDLE SCHOOL PRINCESS, a Princess Diaries spin-off series, written by New York Times-bestselling author Meg Cabot.Olivia Grace Clarisse Mignonette H...

Allie is super excited for the Twirltacular baton competition, until she finds out she has to go to Brittany Hauser’s birthday party instead. What’s a girl to do?

Allie is excited when a new girl joins her class, until the new girl starts telling everyone, including Allie and her best friends, what to do.

Allie is crushed when she is cast as the evil queen in the fourth grade class play. But she soon learns it’s the size of the heart, not the size of the part that matters.