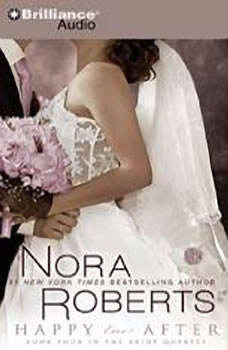 #1 New York Times bestselling author Nora Roberts cordially invites you to meet childhood friends Parker, Emma, Laurel, and Mac — the founders of Vows, one of Connecticut’s premier wedding planning companies. Parker Brown turned the quartet’s childhood game of Wedding Day into their dream jobs. And now she’s the face of Vows — the one who meets every bride’s demands; keeps every event on schedule; and brings Emma’s romantic flowers, Laurel’s delicious treats, and Mac’s stunning photography together in one glorious package. She knows how to make dreams come true… Mechanic Malcolm Kavanaugh loves figuring out how things work, and Parker Brown — with her mile-long legs — is no exception. But as a good friend of Parker’s brother, Mal knows that moving from minor flirtation to major hookup is a serious step. No man has rattled Parker in a long time, but the motorcycle-riding, raven-haired Mal seems to have a knack for it. His passionate kisses always catch her off guard, much like her growing feelings for him. Parker’s business risks have always paid off, but now she’ll have to take the chance of a lifetime with her heart…