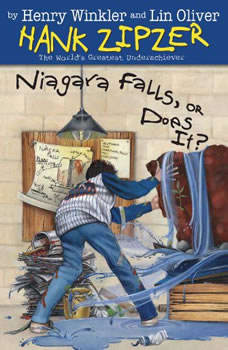 Underachiever Hank Zipzer goes on an unfortunate school camping trip in a comical, kid-friendly novelization of the popular BBC series based on Henry Winkler's best-selling books.What will it take for Mom and Dad to trust Hank to go to the mall unsupervised with his friends? Cooking a family dinner — er, disaster — doesn't exactly say “responsible.” But what if Hank signs up for the school's notorious survival camp and makes it through the whole weekend? Maybe he should factor in being teamed up with his nemesis, McKelty, in a leaky tent, not to mention a desperate search for a cell phone in a field of cow pies. . . . The amiable character originated by Henry Winkler — inspired by his own childhood — comes to life in a humorous adventure set in a font designed to boost readability for kids with dyslexia.

Judy Moody and the Not Bummer Summer
by Megan McDonald

It’s bad enough that Mom and Dad are going on a trip without Judy and Stink and leaving them in the care of Aunt Awful (er, Opal). Now two of Judy’s friends are going Splitsville, too! Just when it looks like her summer is going to be th...

Hank Zipzer #1: Niagara Falls, Or Does It?
by Henry Winkler

Inspired by the true life experiences of Henry Winkler, whose undiagnosed dyslexia made him a classic childhood underachiever, the Hank Zipzer series is about the high-spirited and funny adventures of a boy with learning differences. It's scien...

My Little Pony: Welcome to the Crystal Empire!
by Olivia London

Tea at the Treedome SpongeBob is invited to have tea with a new karate-chopping lady friend, Sandy Cheeks. But when he finds out that Sandy lives in a dome filled with air, SpongeBob’s plan for a new friend might “run dry!”   ...

The 2nd book in an all-new series based on the hit Ubisoft(R) video game franchise "Assassin's Creed." Part historical fiction, part tie-in, this novel creates an all-new narrative fans will love. In "Last Descendants," Owen and a group of other t...

An all-new series based on the hit Ubisoft(R) video game franchise "Assassin's Creed." Part historical fiction, part tie-in, this novel creates an all-new narrative fans of the video games will love. Nothing in Owen's life has been right since his...

Bumblebee is back in this all new action-packed leveled reader! On the run in the year 1987, Bumblebee finds refuge in a junkyard in a small California beach town. Charlie, on the cusp of turning 18 and trying to find her place in the world, discov...

In a quaint New England town with a history of witches and pilgrims, misunderstood eleven-year-old Norman Babcock can see and talk to ghosts. No one believes him, of course-everyone just thinks he's weird (including his parents). But when a folktal...

The Easter Bunny gets all the glory, but what about all the chicks who do all the work making Easter baskets? When the factory chicks feel it's time they get the Easter credit they deserve, mutiny arises and the elite bunny task force, known as the...