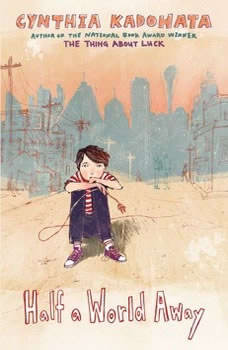 Half a World Away

A kid who considers himself an epic fail discovers the transformative power of love when he deals with adoption in this novel from Cynthia Kadohata, winner of the Newbery Medal and the National Book Award.Eleven-year-old Jaden is adopted, and he knows he’s an “epic fail.’ That’s why his family is traveling to Kazakhstan to adopt a new baby—to replace him, he’s sure. And he gets it. He is incapable of stopping his stealing, hoarding, lighting fires, aggressive running, and obsession with electricity. He knows his parents love him, but he feels...nothing.But when they get to Kazakhstan, it turns out the infant they’ve travelled for has already been adopted, and literally within minutes are faced with having to choose from six other babies. While his parents agonize, Jaden is more interested in the toddlers. One, a little guy named Dimash, spies Jaden and barrels over to him every time he sees him. Jaden finds himself increasingly intrigued by and worried about Dimash. Already three years old and barely able to speak, Dimash will soon age out of the orphanage, and then his life will be as hopeless as Jaden feels now. For the first time in his life, Jaden actually feels something that isn’t pure blinding fury, and there’s no way to control it, or its power. From camels rooting through garbage like raccoons, to eagles being trained like hunting dogs, to streets that are more pothole than pavement, Half a World Away is Cynthia Kadohata’s latest spark of a novel.

The Thing About Luck
by Cynthia Kadohata

The winner of the National Book Award for Young People’s Literature, from Newbery Medalist Cynthia Kadohata. There is bad luck, good luck, and making your own luck—which is exactly what Summer must do to save her family.Summer knows that...

The Boy on the Porch
by Sharon Creech

“This quiet novel sings. A graceful profound story for all ages that speaks well beyond its intended audience.” —Kirkus (starred review)Fans of Newbery Medal winner Sharon Creech's Ruby Holler will love this tween novel about open...

My Family is Forever
by Nancy Carlson

Wolfie the Bunny
by Ame Dyckman

Families of all kinds will delight in this sweet tale of new babies, sibling rivalry, bravery, unconditional love...and veggies!The Bunny family has adopted a wolf son, and daughter Dot is the only one who realizes Wolfie can--and might--eat them a...

<p>Ten Little Eggs celebrates springtime and the bond between a parent and child. With sweet and silly read-aloud rhymes and adorable illustrations, this book reminds readers that families come in all shapes and sizes, but what holds them tog...

You Are My Happy
by Hoda Kotb

From Hoda Kotb, the Today show co-anchor and the #1 New York Times bestselling author of I’ve Loved You Since Forever, comes a book about gratitude for the things in life—both big and small—that ...