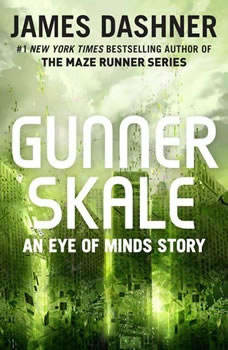 Gunner Skale: An Eye of Minds Story (The Mortality Doctrine)

From James Dashner, author of the #1 New York Times bestselling MAZE RUNNER series, comes an original thirty-page e-short returning fans to the fast-paced, high-tech world in the Mortality Doctrine series that includes The Eye of Minds, The Rule of Thoughts, and The Game of Lives.

Find out how Gunner Skale, the best gamer on the VirtNet, becomes a legend in this story available exclusively online.

And don't miss The Fever Code, the highly anticipated conclusion to the Maze Runner series—the novel that finally reveals how the Maze was built!

“Dashner takes full advantage of the Matrix-esque potential for asking ‘what is real.’” —io9.com

“Set in a world taken over by virtual reality gaming, the series perfectly capture[s] Dashner’s hallmarks for inventiveness, teen dialogue and an ability to add twists and turns like no other author.” —MTV.com

“A brilliant, visceral, gamified mash-up of The Matrix and Inception, guaranteed to thrill even the non-gaming crowd.” —Christian Science Monitor

Confessions About Colton
by Olivia Harvard

CONFESSIONS ABOUT COLTON is a new release from Hachette Audiobooks: Powered by Wattpad - an innovative collaboration between Hachette Book Group, a leading publisher, and Wattpad, a passionate storytelling community of over 45 million people. Your ...