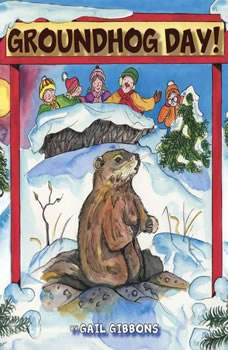 Every February 2nd, people all across the country wonder about the groundhog, Punxsutawney Phil. Will he see his shadow on that day or won't he? Will spring come early or late? Gail Gibbons combines clear, simple wording with her signature illustrations to present information about Groundhog Day, its origins, and the animal at the center of this delightful annual event. Using colorful diagrams and pictures, Gibbons teaches kids about the homes and habits of groundhogs while explaining the history behind the superstitions and fun customs of the yearly celebration.

How Do Dinosaurs Learn to Read?
by Jane Yolen

America's favorite dinosaurs romp and roar as they soak books in the bathtub, throw them, and finally learn how to enthusiastically -- and carefully -- read them...with Mama and Papa at bedtime. Get ready to laugh at this lighthearted, heartwarming...

Are you curious about slithery snakes, loungey lizards, spooky spiders, fuzzy ferrets, and freckled frogs? If so, this book is for you! Extreme Pets! introduces all the coolest creatures you've been wanting to know more about. You'll learn about cor...

From the Arctic Circle to Costa Rica, from Maine to the tip of Baja, California, the coyote thrives like no other animal in North America. It roams the Canadian wilderness and prowls the Arizona deserts and beyond. Over time this highly intelligent ...

The heartwarming true story of two penguins who create a nontraditional family is now available in a sturdy board book edition. At the penguin house at the Central Park Zoo, two penguins named Roy and Silo were a little bit different from the oth...

Caring for Cheetahs
by Rosanna Hansen

There is no animal in the world that can run faster than a cheetah. Yet no matter how quickly they run from trouble, cheetahs may not roam the African plains forever. They have lost much of their habitat to farmland, and some are killed by farmers w...

How Do Dinosaurs Choose Their Pets?
by Jane Yolen

Come along on a playful romp as dinosaurs choose outrageous pets, shocking their parents in this fantastically comic new addition to Yolen and Teague's bestselling, award-winning series. "Can I keep it? It's so cute!" Brimming with laugh-aloud hum...

James Herriot's Treasury for Children collects all of the beloved veterinarian's delightful tales for young listeners. From the springtime frolic of Oscar, Cat-About-Town to the yuletide warmth of The Christmas Day Kitten, these stories-radiantly il...

Did you know there are over 400 different species of sharks? Did you know they have been on Earth much longer than humans, and even lived before the dinosaurs? Here you'll learn all about these fearsome kings of the ocean, including their eating hab...

It’s unbelievable but true! Born on the same day in the same small, German circus town, young Bram and his elephant, Modoc, had a lifelong friendship that spanned over eight decades. But it was never easy. From the breakup of the circus to the...