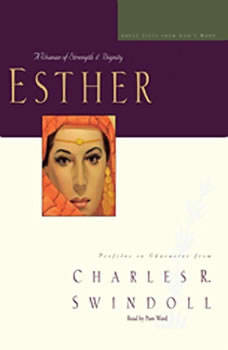 Great Lives: Esther: A Woman of Strength and Dignity

Everyone has a transformation story. Rags to riches. Plain to beautiful. Weak to strong. Esther's story is that, but it is much more. It is a thought-provoking study of God's individual hand, writing silently and unseen across the pages of human history. Perhaps most of all, Esther's story is the account of godly attributes like courage, dignity, wisdom, and strength - attributes that blocked an evil plot, overthrew an arrogant killer and replaced terror with joy in thousands of Jewish homes. // Author Chuck Swindoll interweaves an ancient, real-life story with insight not only into the virtues of Queen Esther, but into how the qualities that formed her and empowered her can be ours.

God often chooses unsuspecting heroes and writes unlikely endings to his stories. Many of the characters in the Bible are even unnamed, yet their adventures reveal the kind of lasting impact that God intends each of us to have.Why do the vast majori...

Empathy for the Devil
by JR. Forasteros

Do we have anything in common with the bad guys of the Bible? The sins of wrath, idolatry, and abuse of power are closer to us than we think. How do we guard against them? We learn not only by following moral exemplars we also need to look at t...