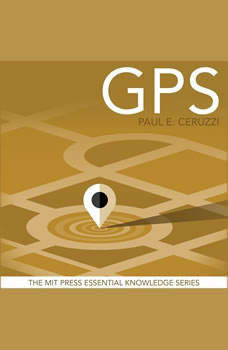 A concise history of GPS, from its military origins to its commercial applications and ubiquity in everyday life. GPS is ubiquitous in everyday life. GPS mapping is standard equipment in many new cars and geolocation services are embedded in smart phones. GPS makes Uber and Lyft possible; driverless cars won't be able to drive without it. In this volume in the MIT Press Essential Knowledge series, Paul Ceruzzi offers a concise history of GPS, explaining how a once-obscure space technology became an invisible piece of our infrastructure, as essential to modern life as electric power or clean water. GPS relays precise time and positioning information from orbiting satellites to receivers on the ground, at sea, and in the air. It operates worldwide, and its basic signals are free, although private companies can commodify the data provided. Ceruzzi recounts the origins of GPS and its predecessor technologies, including early aircraft navigation systems and satellites. He describes the invention of GPS as a space technology in the post-Apollo, pre-Space Shuttle years and its first military and commercial uses. Ceruzzi explains how the convergence of three major technological developments-the microprocessor, the Internet, and cellular telephony-enabled the development and application of GPS technology.

Riddle of the Compass
by Amir D. Aczel

The story of the compass is shrouded in mystery and myth, yet most will agree it begins around the time of the birth of Christ in ancient China. A mysterious lodestone whose powers affected metal was known to the Chinese emperor. When this piece of ...

PraiseENG - A Praise of the Engineer
by Dionigi Cristian Lentini