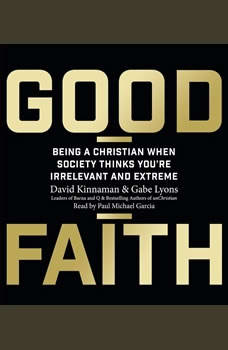 Good Faith: Being a Christian When Society Thinks You're Irrelevant and Extreme

Many Christians today feel overwhelmed as they try to live faithfully in a culture that seems increasingly hostile to their beliefs. Politics, marriage, sexuality, religious freedom--with an ever-growing list of contentious issues, believers find it harder than ever to hold on to their convictions while treating their friends, neighbors, coworkers, and even family members who disagree with respect and compassion. This isn't just a problem that affects individual Christians; if left unaddressed, the growing gap between the faithful and society's tolerance for public faith will have lasting consequences for the church in America.Now the bestselling authors of unChristian turn their data-driven insights toward the thorny question of how Christians talk with people they know and love about the most toxic issues of our day. They help today's disciples understand what they believe and why, and how to keep believing it without being judgmental and defensive. Readers will discover the most significant trends that offer both obstacles and opportunities to God's people, and how not only to challenge culture but to create and renew it for the common good. Perhaps most importantly, David Kinnaman and Gabe Lyons invite fellow Christians to understand the heart behind opposing views and show them how to be loving, life-giving friends despite profound differences. This will be the go-to book for young adult and older believers who don't want to hide from culture but to engage and restore it.