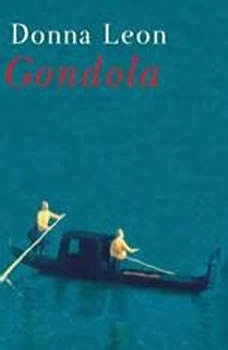 First used in medieval Venice as a deftly maneuverable getaway boat, the gondola evolved over the centuries into a floating pleasure palace, bedecked in silk, that facilitated the romantic escapades of the Venetian elite. Today, the gondola wears black-- a gleaming, elegant hue, and is manned by robust gondolieri in black-and-white-striped shirts and straw hats A tourist favorite, the gondola has never ceased to be a part of authentic Venice. Each boat' s 280 pieces are carefully fashioned in a maestro' s workshop-- though Leon also recounts a tale of an American friend who attempted to make a gondola all on his own. The feat took five years and countless do-overs. But the gondola is a work of art well worth the labor. And once its arched prow pushes off from the dock, the single Venetian at its oar just might break out in a barcarole, a popular Italian boat song. The best of these songs, as timeless as the allure of the gondola itself, are compiled into an accompanying CD.

Leon was born in 1942, and eventually lived in Venice, Italy for over 30 years. She was an English literature lecturer for the University of Maryland in Europe (Italy), and worked on a military base in Italy for several years, before she became a full time writer. She moved to Zurich, Switzerland, and also had a home in a smaller Swiss village.

The novels have been translated from English into several foreign languages, but for some reason the author did not approve them being translated into Italian. German television has shown 22 Commissario Brunetti episodes that they produced for broadcast.