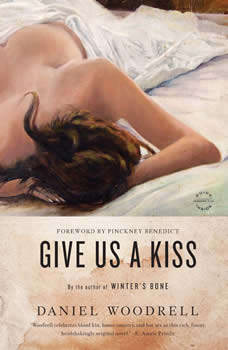 Give Us a Kiss

"My imagination is always skulking about in a wrong place." And now Doyle Redmond, thirty-five-year-old nowhere writer, has crossed the line between imagination and real live trouble. On the lam in his soon-to-be ex-wife's Volvo, he's running a family errand back in his boyhood home of West Table, Missouri--the heart of the red-dirt Ozarks. The law wants his big brother, Smoke, on a felony warrant, and Doyle's supposed to talk him into giving up. But Smoke is hunkered down in the hills with his partner, Big Annie, and her nineteen-year-old daughter, Niagra, making other plans: they're about to harvest a profitable patch of homegrown marijuana.Doyle takes just one look at Niagra's flattering red boots before joining his brother's scheme. Of course it means dealing with the law and maybe worse--the Dollys. A legendary clan of largely criminal persuasion, the Dollys have been feuding with the Redmonds for generations. Now they want a piece of Smoke's cash crop, even if it means killing to get it. Doyle is fast realizing that yes, you can always put the country back in the boy...but sometimes that's not smart.

Has an old hound finally lost his appetite for the hunt?Rhett Morgan is working off-books for the Department of Homeland Security. But his handler thinks he's slipping, suggesting that if he can't deliver on his contract, it may be time to hang 'em ...

The Boy in the Earth
by Fuminori Nakamura

Fuminori Nakamura's Akutagawa Prize-winner plunges us into the depths of a young man's winding, troubled psyche. An unnamed taxi driver in Tokyo has experienced a rupture in his everyday life. He cannot stop daydreaming of suicide, envisioning himse...