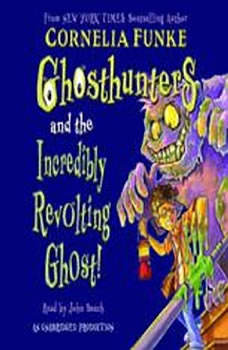 Look out for ghost goo! Dripping sticky green slime wherever it goes, an “ASG” (that’s Averagely Spooky Ghost) is hiding out in Tom’s cellar. Why? Because it’s being haunted, too — by a much bigger, way badder Incredibly Revolting Ghost (“IRG,” for anyone new to ghouls). And the IRG is the kind of ghost that uses its head — as a ginormous bellowing bowling ball, gross!
Good thing for Tom his grandma’s best friend just happens to be a world-famous ghosthunter…

Maybe you don't believe in ghosts, and vampires, and spooky things that creep around in the dark...Then you don't mind sitting by a vampire's tomb at midnight. Or being locked up with the mummies in a dark museum. Or you might like to join the myst...

Emma and the Blue Genie
by Cornelia Funke

The beloved and bestselling author of Inkheart brings her signature imagination, adventure, and humor to a magical full-color chapter book for young readers!   One night, Emma finds a mysterious green bottle floating in the ocean. When she pull...

Two ghosts who need each other. One goes on an adventure. When Marvin the ghost finds himself in a dilemma, he has to muster the courage to save his female friend, Gabby, by seeking out a witch for advice. Next, he faces extreme difficulties an...

The diary of a ghost girlHaley has a way with the ghosts, and even though everyone in town assumed they were hostile and would attack you immediately, Haley discovers otherwise. She heads to the forest and finds a group of fire spitting ghosts that ...

Ghosthunters and the Totally Moldy Baroness!
by Cornelia Funke

Horrifying things are happening at Gloomsburg Castle. To begin with, the creepy place is crawling with Tiny Biting Ghosts (or “TIBIGs,” in official ghosthunter code). And now it appears as if the murderous spirit of a brutal Baroness has...

In this entertaining anthology of seven new ghost stories, written especially for Naxos AudioBooks, we meet all kinds of phantoms in different situations: a kind-hearted but accident-prone spectre unwittingly upsetting a family home, as well as ghos...

Cardin and Narfur are warriors for the king. The Great White Palace regularly has assignments for them. They complement each other, going on adventures in the mountains and in swamps, but when the king requests that a dangerous wither be slain, they...

You would like being friends with Leo. He likes to draw, he makes delicious snacks, and most people can't even see him. Because Leo is also a ghost. When a new family moves into his home and Leo's efforts to welcome them are misunderstood, Leo decid...

Ghosthunters and the Gruesome Invincible Lightning Ghost
by Cornelia Funke

Can Tom and the team “dampen the spirit”–permanently!–of a fiery phantom, or are they about to get burned? Boy hero Tom, Hugo the Averagely Spooky Ghost, and famed ghoul hunter Hetty Hyssop have formed an agency dedicated to...