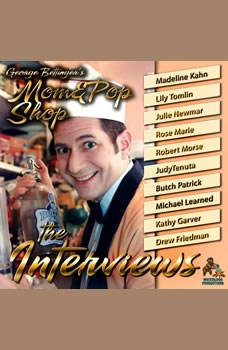 Comedian and radio personality George Bettinger talked with Emmy winning actress-comedienne Lilly Tomlin (Laugh-In) just after she received her Kennedy Center Honors Award. Tomlin, who currently stars opposite Jane Fonda, Martin Sheen, and Sam Waterston in the "hit" Netflix original series Grace and Frankie, is just one of ten "rare and unedited" celebrity interviews in this collection: Madeline KahnJulie NewmarRose MarieRobert MorseJudy TenutaButch PatrickMichael LearnedKathy GarverDrew FriedmanLilly Tomlin"These are exclusive and unique interviews I have archived over the years. My radio show "The Mom & Pop Shop" can be heard internationally on Monday, Wednesday and Friday's at 4 PM (est) onwww.dreamstreamradio.com." - George BettingerWaterlogg Productions is a full service audio/video entertainment company, founded in 2002 by husband and wife creative duo Joe Bevilacqua & Lorie Kellogg. Together they have been responsible for over 150 titles distributed exclusively by Blackstone Audio. Check out their website at www.Waterlogg.com.

Toddlers Are A**holes
by Bunmi Laditan

Toddler a**holery is a normal part of human development—not unlike puberty, except this stage involves throwing food on the floor and taking swings at people who pay your way in life. For parents of toddlers, it's a "you better laugh so you do...

I Heart My Little A-Holes
by Karen Alpert

Popular blogger Karen Alpert shares her hysterical take on the many "joys" of parenting—I Heart My Little A-Holes is full of hilarious stories, lists, thoughts and pictures that will make you laugh so hard you'll wish you were wearing a diape...

Forgive him, Father, for Stephen Colbert has sinned. He knew it was wrong at the time. But he went ahead and did it anyway. Now he’s begging for forgiveness. Based on his popular segment from The Late Show, Stephen Colbert and his team of writ...

My Inappropriate Life
by Heather McDonald

In her hilarious New York Times bestseller You’ll Never Blue Ball in This Town Again, Heather McDonald recounted her adventures as an unwilling virgin in Hollywood. Now happily married with three wonderful kids, she shows that life as a grown-...

What Would MacGyver Do?
by Brendan Vaughan

You're driving on a deserted road when your car dies. Your cell phone isn't getting service. All you have on hand are a gum wrapper and a wire hanger. Or maybe you're living in a building without central air conditioning in July. You can't afford an...

He's Just Not That Into You
by Greg Behrendt

The Instant New York Times Bestseller He's Just Not That Into You -- based on the popular episode of Sex and the City -- educates otherwise smart women on how to tell when a guy just doesn't like them enough, so they can stop wasting time making ex...