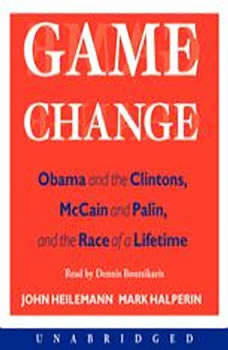 Game Change: Obama and the Clintons, McCain and Palin, and the Race of a Lifetime

“It’s one of the best books on politics of any kind I’ve read. For entertainment value, I put it up there with Catch 22.” —The Financial Times “It transports you to a parallel universe in which everything in the National Enquirer is true….More interesting is what we learn about the candidates themselves: their frailties, egos and almost super-human stamina.” —The Financial Times “I can’t put down this book!” —Stephen Colbert Game Change is the New York Times bestselling story of the 2008 presidential election, by John Heilemann and Mark Halperin, two of the best political reporters in the country. In the spirit of Richard Ben Cramer’s What It Takes and Theodore H. White’s The Making of the President 1960, this classic campaign trail book tells the defining story of a new era in American politics, going deeper behind the scenes of the Obama/Biden and McCain/Palin campaigns than any other account of the historic 2008 election.

Assholes: A Theory of Donald Trump
by Aaron James

Make America Great Again? Donald Trump is an asshole is a fact widely agreed upon—even by his supporters, who actually like that about him. But his startling political rise makes the question of just what sort of asshole he is, and how his ass...

Fed up with our arrogant federal government? Dont want massive programs we dont need and cant afford? Then join the Red State Uprising! In his new book, RedState.com founder Erick Erickson clearly outlines what needs to change in Washington and what...

Our Lost Constitution
by Mike Lee

The still-unfolding story of America’s Constitution is a history of heroes and villains—the flawed visionaries who inspired and crafted liberty’s safeguards, and the shortsighted opportunists who defied them. Those stories are know...

The Death of Liberalism
by R. Emmett Tyrrell Jr.

America’s founders risked their lives to give us a republic — and dared us to keep it. But for more than a century, an insidious force has done its worst to rip the republic asunder: a movement of elites, academes, and politicians bent o...

The Year of Voting Dangerously
by Maureen Dowd

Maureen Dowd's incendiary takes and takedowns from 2016--the most bizarre, disruptive and divisive Presidential race in modern history.Trapped between two candidates with the highest recorded unfavorables, Americans are plunged into The Year of Vot...

From the author of the #1 New York Times bestsellers The Amateur and Blood Feud.…Unlikeable is the stunning, powerful exposé of Hillary Clinton and her floundering race for the White House. With unprecedented access to longtime associates...

Common Sense for the Common Good
by Gary E. Johnson

With the contentious 2016 U.S. presidential election cycle spinning into its final phases, only one thing seems clear: the American people are less than satisfied with the two major political parties’ candidates. Gary Johnson, Libertarian Par...