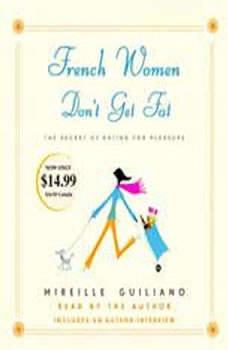 Stylish, convincing, wise, funny–and just in time: the ultimate non-diet book, which could radically change the way you think and live.

French women don’t get fat, but they do eat bread and pastry, drink wine, and regularly enjoy three-course meals. In her delightful tale, Mireille Guiliano unlocks the simple secrets of this “French paradox”–how to enjoy food and stay slim and healthy. Hers is a charming, sensible, and powerfully life-affirming view of health and eating for our times.

As a typically slender French girl, Mireille (Meer-ray) went to America as an exchange student and came back fat. That shock sent her into an adolescent tailspin, until her kindly family physician, “Dr. Miracle,” came to the rescue. Reintroducing her to classic principles of French gastronomy plus time-honored secrets of the local women, he helped her restore her shape and gave her a whole new understanding of food, drink, and life. The key? Not guilt or deprivation but learning to get the most from the things you most enjoy. Following her own version of this traditional wisdom, she has ever since relished a life of indulgence without bulge, satisfying yen without yo-yo on three meals a day.

Now in simple but potent strategies and dozens of recipes you’d swear were fattening, Mireille reveals the ingredients for a lifetime of weight control–from the emergency weekend remedy of Magical Leek Soup to everyday tricks like fooling yourself into contentment and painless new physical exertions to save you from the StairMaster. Emphasizing the virtues of freshness, variety, balance, and always pleasure, Mireille shows how virtually anyone can learn to eat, drink, and move like a French woman.

A natural raconteur, Mireille illustrates her philosophy through the experiences that have shaped her life–a six-year-old’s first taste of Champagne, treks in search of tiny blueberries (called myrtilles) in the woods near her grandmother’s house, a near-spiritual rendezvous with oysters at a seaside restaurant in Brittany, to name but a few. She also shows us other women discovering the wonders of “French in action,” drawing examples from dozens of friends and associates she has advised over the years to eat and drink smarter and more joyfully.

Here are a culture’s most cherished and time-honored secrets recast for the twenty-first century. For anyone who has slipped out of her zone, missed the flight to South Beach, or accidentally let a carb pass her lips, here is a buoyant, positive way to stay trim. A life of wine, bread–even chocolate–without girth or guilt? Pourquoi pas?

Stylish, convincing, wise, funny–and just in time: the ultimate non-diet book, which could radically change the way you think and live.French women don’t get fat, but they do eat bread and pastry, drink wine, and regularly enjoy three-co...

Tips, tricks and recipes to make your feasts and fetes more French, from the New York Times bestselling author of Lunch in Paris and Picnic in Provence When Elizabeth Bard, a New Yorker raised on Twizzlers and instant mac and cheese, fell for a han...

Learn french A Quick and Easy Guide
by Susan grant

Learn French A Quick and Easy GuideDo you want to learn another language? Are you a French speaker who have problem with the English language? This book will help you breakdown the translation from English to French and French back to English. Often...

Stylish, convincing, wise, funny–and just in time: the ultimate non-diet book, which could radically change the way you think and live.French women don’t get fat, but they do eat bread and pastry, drink wine, and regularly enjoy three-co...

i liked this book because it didn't give me hard and fast rules-not a diet, exactly, it is more about a way to approach food- as a pleasure, not a battle. changing some things she suggests in my eating style has indeed helped me lose a few pounds and feel better about food, one of the greatest blessings and pleasures we have!

This book was informative and a light listen. It gives some basic rules of eating and exercising with some secret tips. I actually am taking with me life-changes of the way I eat and exercise without the dread of it being hard. The suggestions in this book are easy to incorporate into a way of life. I liked this book so much I listened to it again.

There was nothing in this book I didn't know already. Unless you are a person who does not pay attention to what they eat and their health, nothing in this book will be surprising. It lacks humor and is not written well. I feel it becomes rather repetitive, pretty quickly and was pretty boring, making it difficult to get through. However, I do like the recipes throughout the book and have started trying some already.