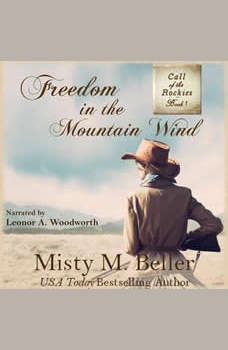 Freedom in the Mountain Wind

Series: Call of the Rockies

The last epic journey before her life changes forever.

Susanna Wilkins will do anything to make her father's final dream come true, including trek along the path Lewis and Clark explored into the untamed wilds of the Rocky Mountains. Every mile is more crucial now that lung cancer is stealing Pa's last days faster than she can come to terms with losing him. The journey becomes harder than she ever expected, but paddling upriver through fierce rapids and fighting hungry grizzlies isn't what terrifies her the most.

Beaver Tail endured more than he can stand from the women in his Blackfoot camp, but the last disaster gave him the final shove he needed to join this band of brothers searching for one of their group who's gone missing. The last thing he expected was to find a white woman and her sick father stranded at the base of massive waterfall. His plan is to help them carry their oversize canoe and supplies, then leave them to their strange mission. Yet, the more he learns about the pair, the more he realizes his life is about to be derailed—again.

From a USA Today bestselling author comes another epic journey through breathless landscapes and adventure so intense, lives will never be the same.

Mail Order Bride - A Bride for Aaron
by Karla Gracey

This is a standalone audiobook and doesn't need to be read as part of the series. Alice Springham has worked as a maid in a top Boston hotel since she was a girl. But she is feeling restless. Not knowing what she wants she answers an advertisement i...

Mail Order Bride - A Bride for Mackenzie
by Karla Gracey

Annie Cahill has had a tough life, forced to leave home and work from an early age to support her sick Mama and younger siblings. Always the one everybody else could rely on she decides to finally reach out to take something for herself. But will sh...