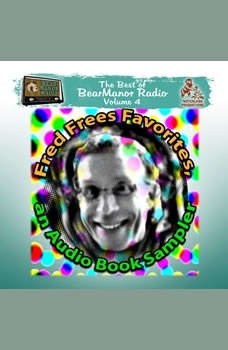 Trying to decide which audiobook is best for you? Let Fred Frees pick out some samples for you! This series of hour-long programs presents the first chapters of Fred's handpicked favorite BearManor and Waterlogg audiobooks.This collection includes:The Last Films of 50 Great Directors by Nat SegaloffThe Laugh Makers: Bob Hope's Incredible Gag Writers by Bob MillsSon of Harpo Speaks by Bill MarxAn Interview with Arthur MarxDon't Wear Silver in the Winter by Janet Cantor GariJourney thru the Unknown by the Unknown ComicYabba Dabba Doo! The Alan Reed Story by Alan ReedScenes from the Daws Butler Workshop by Daws Butler and Joe Bevilacqua3712 by Ben Ohmart, performed by Fred FreesSons of the Father by Janette Anderson, read by Mike DennisAnother Nice Mess by Raymond Valinoti, narrated by Jack de GoliaPedro's Parodies by Pedro Pablo Sacristan, performed by Joe Bevilacqua