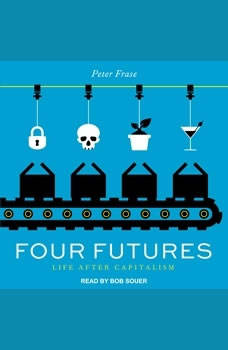 Peter Frase argues that increasing automation and a growing scarcity of resources, thanks to climate change, will bring it all tumbling down. In Four Futures, Frase imagines how this post-capitalist world might look, deploying the tools of both social science and speculative fiction to explore what communism, rentism, socialism, and exterminism might actually entail. Could the current rise of real-life robocops usher in a world that resembles Ender's Game? And sure, communism will bring an end to material scarcities and inequalities of wealth—but there's no guarantee that social hierarchies, governed by an economy of "likes," wouldn't rise to take their place. A whirlwind tour through science fiction, social theory, and the new technologies already shaping our lives, Four Futures is a balance sheet of the socialisms we may reach if a resurgent Left is successful, and the barbarisms we may be consigned to if those movements fail.

Technology vs Humanity
by Gerd Leonhard

Futurist Gerd Leonhard breaks new ground again by bringing together mankind’s urge to upgrade and automate everything—down to human biology itself—with our timeless quest for freedom and happiness.Before it’s too late, we mus...

On the Evolution of Intimacy
by Charles M. Johnston MD

In no aspects of life today do we confront more rapid and easily confusing change than in the worlds of gender and intimacy. Men and women equally are left without clear guideposts for their choices. In this short book, one of our time’s most ...