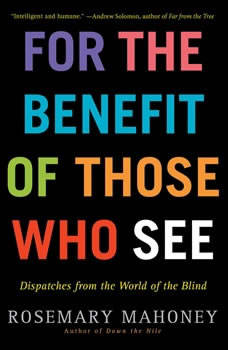 For the Benefit of Those Who See: Dispatches from the World of the Blind

"In this intelligent and humane book, Rosemary Mahoney writes of people who are blind....She reports on their courage and gives voice, time and again, to their miraculous dignity."--Andrew Solomon, author of Far From the Tree In the tradition of Oliver Sacks's The Island of the Colorblind, Rosemary Mahoney tells the story of Braille Without Borders, the first school for the blind in Tibet, and of Sabriye Tenberken, the remarkable blind woman who founded the school. Fascinated and impressed by what she learned from the blind children of Tibet, Mahoney was moved to investigate further the cultural history of blindness. As part of her research, she spent three months teaching at Tenberken's international training center for blind adults in Kerala, India, an experience that reveals both the shocking oppression endured by the world's blind, as well as their great resilience, integrity, ingenuity, and strength. By living among the blind, Rosemary Mahoney enables us to see them in fascinating close up, revealing their particular "quality of ease that seems to broadcast a fundamental connection to the world." Having read FOR THE BENEFIT OF THOSE WHO SEE, you will never see the world in quite the same way again.