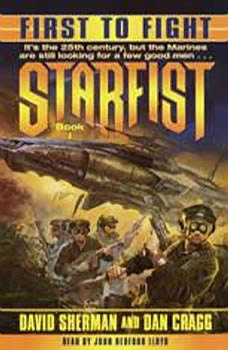 First to Fight: Starfist, Book I

Stranded in a hellish alien desert, stripped of their strategic systems, quick reaction force, and supporting arms, and carrying only a day's water ration, Marine Staff Sergeant Charlie Bass and his seven-man team faced a grim future seventy-five light-years from home. The only thing between his Marines and safety was eighty-five miles of uncharted, waterless terrain and two thousand bloodthirsty savages with state-of-the-art weapons in their hands and murder on their minds.

But the enemy didn't reckon on the warrior cunning of Marines' Marine Charlie Bass and the courage of the few good men who would follow him anywhere--even to death. . .

It’s the 25th century, but the Marines are still looking for a few good men . . .“Marines ain't supposed to sit. We're supposed to kill.”After the resource-rich planet Diamunde is seized by the armed forces of industrialist Marston...

When a scientific team exploring an obscure planet fails to make its regular communications check, the Marines of the third platoon are sent to investigate. They prepare for a routine rescue operation, but what they find on Society 437 is a horror b...