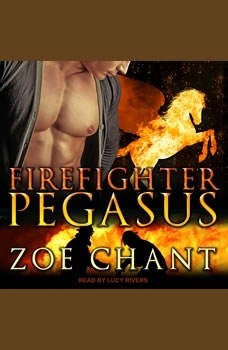 Curvy pilot Connie West hates taking risks. But when her reckless father stakes her beloved airplane in a bet with a ruthless loan shark, Connie is forced to enter the Rydon Cup, a dangerous high-speed air race. To win the bet, she needs a co-pilot she can trust completely. Someone cautious and sensible. Someone completely unlike the gorgeous, wild Chase . . . Pegasus shifter and firefighter Chase Tiernach lives life at top speed, but not even his close friends in his elite, all-shifter fire crew can guess that his ready grin conceals a broken heart. Three years ago, he met his fated mate Connie . . . and lost her again, thanks to his reputation for recklessness. When Chase unexpectedly rescues Connie from a fire, he's determined that this time, he'll win her trust. All he has to do is fight off a gang of criminal shark shifters, defend Connie from a mysterious assassin, convince her to marry him so his clan will let him tell her he shifts into a flying horse, and win a perilous air race in a vintage warplane! What could possibly go wrong?