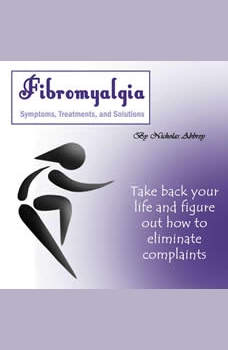 This contains all the information you need to know about fibromyalgia.

In the past decade or so, fibromyalgia has been detected in more and more individuals. The origin of this unfortunate condition can cause a myriad of side-effects and symptoms that can damage and limit a person’s everyday functioning. Although the condition is incurable - according to physicians who might hope for a better future epiphany in science to occur at some point - there are definitely treatments, things to take into account, and solutions for minimizing the negative consequences of carrying this condition around.

Certain foods and diets come with using common sense, as well as sophisticated injections, exercises, and other treatments. Diagnostic criteria must be established, in particular for those who tend to undergo said treatments, but when the verity of the diagnosis has been determined, solutions can be sought.

This audiobook seeks to enlighten those who are puzzled by the symptoms and limitations of their body and who are attempting to figure out if they have fibromyalgia and what to do about it.

Clinicians have discovered a variety of reasons for ischemic pain, and have come up with proven treatments to combat the said issue. Ischemic pain is caused by blood supply to an organ that does not receive sufficient oxygen or nutrients. The conseq...

Sleep: The Ultimate Guide to Get Better Rest and Cure Sleep Disorders and Insomnia
by Laura S. Proby

Do you struggle to get enough sleep at night?Are you constantly tired and irritable as a result?Would you like to make sure you get proper rest so that you can face the day fresh and ready?Sleep is vitally important for our bodies. It allows us to r...

Are you living with chronic fatigue syndrome or extreme exhaustion? Are you tired of being passed around from doctor to doctor or spending thousands of dollars on programs without seeing any lasting results?Yoga isn't just a fad exercise. It's part ...

Book 1: Fibromyalgia - This contains all the information you need to know about fibromyalgia.In the past decade or so, fibromyalgia has been detected in more and more individuals. The origin of this unfortunate condition can cause a myriad of side-e...