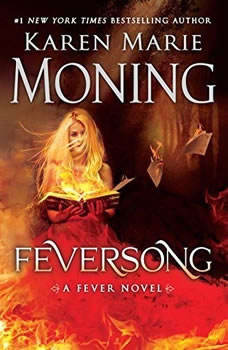 NEW YORK TIMES BESTSELLER • MacKayla Lane and Jericho Barrons return in the epic conclusion to the pulse-pounding Fever series, where a world thrown into chaos grows more treacherous at every turn.As Mac, Barrons, Ryodan, and Jada struggle to restore control, enemies become allies, right and wrong cease to exist, and the lines between life and death, lust and love, disappear completely. Black holes loom menacingly over Dublin, threatening to destroy the earth, yet the greatest danger is the one MacKayla Lane has unleashed from within: The Sinsar Dubh—a sentient book of unthinkable evil—has possessed her body and will stop at nothing in its insatiable quest for power.The fate of Man and Fae rests on destroying the book and recovering the long-lost Song of Making, the sole magic that can repair the fragile fabric of the earth. But to achieve these aims, sidhe-seers, the Nine, Seelie, and Unseelie must form unlikely alliances and make heart-wrenching choices. For Barrons and Jada, this means finding the Seelie queen, who alone can wield the mysterious song, negotiating with a lethal Unseelie prince hell-bent on ruling the Fae courts, and figuring out how to destroy the Sinsar Dubh while keeping Mac alive.This time, there’s no gain without sacrifice, no pursuit without risk, no victory without irrevocable loss. In the battle for Mac’s soul, every decision exacts a tremendous price.Look for all of Karen Marie Moning’s sensational Fever novels:DARKFEVER | BLOODFEVER | FAEFEVER | DREAMFEVER | SHADOWFEVER | ICED | BURNED | FEVERBORN | FEVERSONGPraise for Feversong“Bold and brilliantly layered, deeply emotive and all-consuming, the story curves full circle as Mac and Dani try to save the world. . . . Fans of the series . . . will love every moment, every page. As one now expects from the incredibly talented [Karen Marie] Moning, gasp-inducing surprises await.”—USA Today“Heart-pounding.”—Entertainment Weekly“Epic.”—New Orleans Gambit“Moning is one of the best. . . . [Feversong is] an exciting, pulse-pounding action-filled adventure that at times is dark and terrifying, and other times gloriously happy and romantic. . . . Another fantastic story.”—The Reading Cafe“[Feversong is an] epic ending to an epic series. . . . It’s all feels.”—The Review Loft

A Touch of Crimson
by Sylvia Day

An angel with immense power and insatiable desire, Adrian Mitchell leads an elite Special Ops unit of the seraphim. His task is to punish the Fallen — angels who have become vampires — and command a restless pack of indentured lycans. B...

The Spirit of Steamboat
by Craig Johnson

Cincinnati born author, Karen Marie Moning, has made the New York Times best seller list on several occasions, with Shadowfever having reached the number one position on that and several other lists. From her background in mid-America, her college days at Purdue University, then working as a bartender, computer consultant, and an insurance specialist........Karen Moning achieved great success as an author. She has received several awards for her current genre of Urban Fantasy.

When Moning began her career, she focused on Scottish paranormal romance, but became very fascinated with Celtic Mythology. She eventually switched to Urban Fantasy located in Dublin, Ireland. Her lead characters were Fae, "an ancient race of immortal beings who have lived secretly among humans for millennia.

Karen Moning has three main book series, with more than twenty books within the three series. Those include the Highlander Series, the Fever Series, and the Fever World Series.