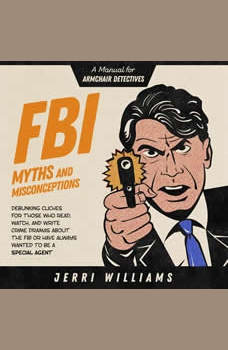 FBI Myths and Misconceptions: A Manual for Armchair Detectives

This manual debunks FBI myths and misconceptions for those who read, watch, and write crime dramas about the FBI or want to become an FBI Special Agent. Like most people, you've probably learned about the FBI from popular culture-reading books and watching TV shows and movies, along with, of course, the news. You might be surprised to learn that a lot of what you've been reading and watching is inaccurate.

This informative and fun manual will help you:

It's an excellent FBI reference book and FBI career guide.

Get your copy today!

To Protect and Serve
by Norm Stamper

American policing is in crisis. The last decade witnessed a vast increase in police aggression, misconduct, and militarization, along with a corresponding reduction in transparency and accountability. Nowhere is this more noticeable and painful than...

Pay to Play
by Jerri Williams

Special Agent Kari Wheeler may have made the worst decision of her life.The deeper she digs into the new assignment she unwisely accepted, investigating corruption in the Philadelphia strip club industry, the more her work threatens everything she v...