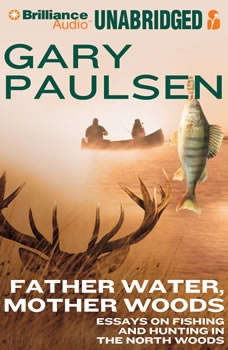 Father Water, Mother Woods: Essays on Fishing and Hunting in the North Woods

Survival in the wilderness – Gary Paulsen writes about it so powerfully in his novels Hatchet, The River, Brian's Winter, Brian's Return, and Brian's Hunt because he’s lived it. These essays recount his adventures alone and with friends, taking listeners through the seasons. In Paulsen’s north country, every expedition is a major one, and often hilarious. Once again Gary Paulsen demonstrates why he is one of America’s most beloved writers, for he shows us fishing and hunting as pleasure, as art, as companionship, and as source of life’s deepest lessons.

Selfie Made
by Meridith Valiando Rojas

HOW DO I MAKE IT BIG ON SOCIAL MEDIA? WHAT IS MY STORY—AND WHO IS MY AUDIENCE? WHAT CONTENT SHOULD I POST TO ACHIEVE #SUCCESS? HOW DO I GO VIRAL…OR HOW LONG WILL IT TAKE ME TO GET NOTICED?Selfie Made is a one-of-a-kind guide to creating...

How to Improve English Speaking
by Marvin L.Wiese

How to Become a Confident and Fluent English Speaker!This book provides you with the key secrets you’ll need to unlock the next level of fluency and open an entirely new world of fluency. With this book by your side, you’ll discover that...

This book contains proven steps and strategies on how to become a truly charismatic person who can inspire positivity in others with a charm and personality like no other. The book will let you know about the elements of charisma and characteristics...

How I Resist
by Maureen Johnson

This audiobook presents an all-star collection of essays about activism and hope, edited by bestselling YA author Maureen Johnson.Now, more than ever, young people are motivated to make a difference in a world they're bound to inherit. They're ready...

On June 12, 2016 a gunman walked into a crowded nightclub in Orlando, Florida and shot 102 people, murdering 49 of them. At 2 AM, the Pulse nightclub was winding down on its weekly Latino night. The building was dark, crowded, and loud. Patrons were...