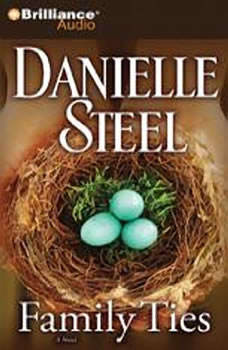 From Manhattan to Paris and all the way to Tehran, Danielle Steel weaves a powerfully compelling story that reminds us how challenging and unpredictable life can be—and how the bonds of family hold us together.Annie Ferguson was a bright young Manhattan architect with a limitless future—until a single phone call changed the course of her life forever. Overnight, she became the mother to her sister’s three orphaned children, keeping a promise she never regretted making, even if it meant putting her own life indefinitely on hold.Now, at forty-two, still happily single with a satisfying career and a family that means everything to her, Annie is suddenly facing an empty nest. With her nephew and nieces now grown and confronting challenges of their own, she must navigate a parent’s difficult passage between helping and letting go. The eldest, twenty-eight-year-old Liz, an overworked editor in a high-powered job at Vogue, has never allowed any man to come close enough to hurt her. Ted, at twenty-four a serious law student, is captivated by a much older woman with children, who is leading him much further than he wants to go. And the impulsive youngest, twenty-one-year old Katie, is an art student about to make a choice that will lead her to a world she is in no way prepared for but determined to embrace.Then, when least expected, a chance encounter changes Annie’s life again in the most surprising direction of all….