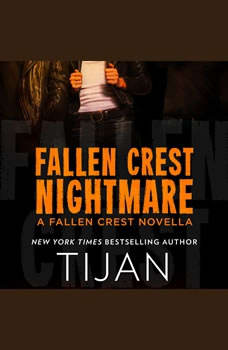 Originally published as part of the USA Today bestselling anthology Eye Candy, Fallen Crest Nightmare brings listeners the characters—and the scares—in this companion audiobook to Tijan’s New York Times bestselling world! This program also includes a never before published bonus scene from this Halloween tale. The characters of the popular Fallen Crest series are back together for a night of mischief! Sam, Mason, and the rest of the gang enter a Halloween-themed weekend with pumpkin carving, a girls’ night out, and a terrifying haunted house, but the weekend takes a turn into something far more sinister…

Getting Down
by Helena Hunting

Originally published as part of the USA Today bestselling Eye Candy anthology, Getting Down by Helena Hunting is a hilarious and hot short story set in the Shacking Up world. This steamy audiobook contains a never before published bonus scene!Ruby S...

Holiday with a Twist
by Shannon Stacey

New York Times bestselling author Shannon Stacey celebrates the season in this brand-new holiday novella After a messy breakup, Leigh Holloway is ready to start her life over. Until her parents put the family home on the market and call her bac...

All signs point north for Not-So-Saint Nick  After too many mugs of mulled wine, introverted accountant Holly North lets her best friend guilt her into filling in as Mistress Christmas at Sugar Plums, a Christmas-themed strip club. The combinat...

A love match hotter than the Fourth of July… Wild West Boys, Book 2 Construction worker Willow Gregory entered the annual Miss Firecracker beauty contest on a dare and shocked everyone by winning. After a year of tiara-wearing good behavior, ...

Emma Kelly needs a Christmas miracle. Nick Shepherd loves his life in Salt Spring Island, where he sculpts in a studio with the grizzled and talented artist Mike Nagorski. Mike's estranged daughter, Emma Kelly, arrives in their quiet haven, and tho...

Hold Her Again
by Shannon Stacey

A country-music star returns home to win back the woman he loves in this charming holiday novella from New York Times bestselling author Shannon Stacey Ava Wright isn't happy to see her high school sweetheart rolling into their hometown a few w...