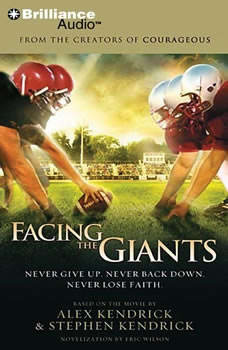 Facing the Giants: Never Give Up. Never Back Down. Never Lose Faith.

It’s been six years without a winning season and Coach Grant Taylor’s job is on the line. Unless the Shiloh Christian Eagles turn things around — and fast — he’s history. Unfortunately, their leading scorer has just left for a rival school and the team has lost its drive. The pressure is on. On the home front, things aren’t much better for Grant. His house is falling apart. His old clunker of a car keeps dying, and the coach and his wife have been unsuccessful in their attempts to start a family. But God is on the move — in many ways. When Grant receives a message from an unexpected visitor, he searches for a stronger purpose for his football team. When faced with unbelievable odds, Grant and his Shiloh Eagles must rise above their fear and step up to their greatest test of strength and courage.