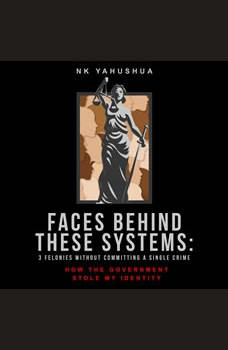 Faces Behind These Systems: 3 Felonies without Committing A Single Crime, How the Government Stole My Identity

True story of how the government single handedly stole NK's identity. For NK, life has been anything but a walk in the park.

When NK Yahushua set out with her friend and her dog for a sunset hike in L.A.’s famous Griffith Park, she set out toward her own demise. Before the night was over, N.K would be racially profiled by a park ranger, arrested without cause, and falsely imprisoned miles away from her Los Feliz home. And that would only be the beginning.

For the next decade and a half, NK finds herself swirling helplessly in the merciless grip of a prideful and discriminatory judicial system. Despite her doctoral degree, she loses her ability to secure gainful employment due to her criminal record's unnamed dark mark with her home in foreclosure and her future hanging precariously in the balance. NK sets out to determine exactly who placed her on California’s blacklist and why. What she discovers is the shocking evidence of nefarious activity within America’s insidious injustice system.

Will she live to see her record cleared and her life restored?

Two lectures analyzing and critiquing the efforts by Marxists and legal positivists to establish credible bases for human rights.

American evangelicals, especially dispensationalists, have a tendency to whitewash whatever the modern Israeli government does, owing to a supposed identification of contemporary Israel with the Israel of the Old Testament and biblical prophecy. So ...