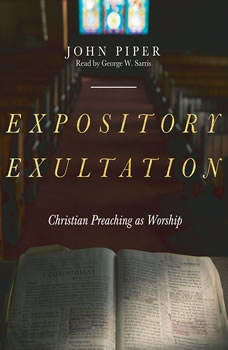 Well-known around the world for his passionate and powerful preaching, John Piper has distilled over thirty years of preaching experience into one book for the benefit of pastors and other Bible teachers. Building on the foundation laid by his previous two books, A Peculiar Glory and Reading the Bible Supernaturally, Piper makes a compelling claim about the purpose of a sermon: not just an explanation of the text, but awakening worship by being worship. Christian preaching is a God-appointed means of transforming its hearers in both head and heart, not only in intellect but also in affections. With clear examples of specific methods, Piper shows preachers how and what to communicate from the pulpit in a way that takes seriously the task of handling the Word of God week in and week out in the context of, and as, Christian worship.

Communicating for a Change
by Andy Stanley

When You Talk, Are People Changed? Whether you speak from the pulpit, podium, or the front of a classroom, you don’t need much more than blank stares and faraway looks to tell you you’re not connecting. Take heart before your audience ...

The Affectionate Theology of Richard Sibbes
by Mark Dever

In a time of political turmoil and religious upheaval, Richard Sibbes sought to consistently apply the riches of Reformation theology to his hearers' lives. He emphasized the security of God's covenant, the call for assurance of salvation, a...

The Power of Preaching
by Tony Evans

The No-Nonsense Preaching Manual Every Pastor NeedsThe first book in the Kingdom Pastor’s Library from Tony Evans, The Power of Preaching will help you be faithful to the Word of God and preach with power and conviction. From the pra...

The Expository Genius of John Calvin
by Steven J. Lawson

In The Expository Genius of John Calvin, Dr. Steven J. Lawson delves into the practices, commitments, and techniques that made John Calvin, the great Reformer of the sixteenth century, such an effective preacher during his long pastorate at Saint Pi...

He is Not Silent
by Albert Mohler

Is contemporary preaching suffering from an infatuation with technology, a focus on felt needs, an absence of the gospel? Mohler thinks preaching has fallen on hard times! Join him as he examines the public exposition of the Bible and explains why t...

What makes for good preaching?In this accessible volume—written for preachers and preachers in training—pastor David Helm outlines what must be believed and accomplished to become a faithful expositor of God’s Word.In addition to o...

The Loveliness of Christ
by Samuel Rutherford

Samuel Rutherford, born in the early 1600's, faced many hardships throughout his personal and spiritual life. Despite the criticism of his faith, imprisonment for the advocacy of the church, and his exile from his beloved hometown, Rutherford wa...

The Evangelistic Zeal of George Whitefield
by Steven J. Lawson

George Whitefield was called the Grand Itinerant for his unprecedented preaching ministry, he crossed the Atlantic Ocean numerous times and lit fires of revival on two continents. Yet, as Dr.Lawson illustrates in this latest entry in the Long Line o...

Steal Away Home
by Matt Carter

Thomas Johnson and Charles Spurgeon lived worlds apart.Johnson, an American slave, born into captivity and longing for freedom--- Spurgeon, an Englishman born into relative ease and comfort, but, longing too for a freedom of his own. Their respectiv...