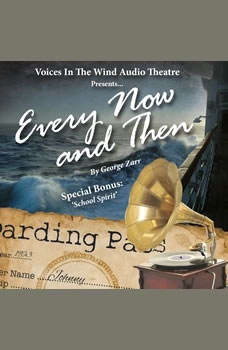 Every Now and Then

A sunny day, a quaint antique store, browsing through the artifacts of the pastTo some, these are the ingredients for a pleasantly spent afternoon. To Frank, it is the beginning of a journey that will tear his world inside out. Is his amusing and puzzling journey down memory lane an actual journey, or is it a careening descent into madness?Also included is a special bonus, School Spirit, recorded before a live audience for a Halloween radio broadcast: After a nighttime brush with the supernatural, will Michelle's first day of high school be her last?

The harshness of 19th century life for women, seen through the eyes of a young bride. Margery Blake is nothing but a pawn in family affairs, and her marriage is seen as a good match. Margery has no power, no voice, no control over her life, and endu...

The Doctor is In
by George Zarr

From award-winning writer, director, and producer George Zarr comes a tale of suspense and mystery featuring a full cast, engaging sound effects, and music.A physician from Minneapolis, well-versed in metaphysics, mysteriously barges into the lives ...