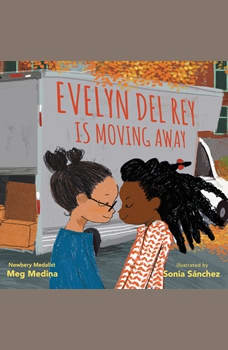 Evelyn Del Rey Is Moving Away

A big truck with its mouth wide open is parked at the curb, ready to gobble up Evelyns mirror with the stickers around the edge...and the sofa that we bounce on to get to the moon.Evelyn Del Rey is Danielas best friend. They do everything together and even live in twin apartments across the street from each other: Daniela with her mami and hamster, and Evelyn with her mami, papi, and cat. But not after todaynot after Evelyn moves away. Until then, the girls play amid the moving boxes until its time to say goodbye, making promises to keep in touch, because they know that their friendship will always be special. The tenderness of Meg Medinas beautifully written story about friendship and change is balanced by Sonia Snchezs colorful and vibrant depictions of the girls urban neighborhood.

Small in the City
by Sydney Smith

When you're small in the city, people don't see you, and loud sounds can scare you, and knowing what to do is sometimes hard. But this little kid knows what it's like and knows the neighborhood. And a little friendly advice can go a long way. Alleys...

Slipper has a New Home
by Tess Rixen

While Slipper is a small little cat, new to the world, she is not afraid of exploring! Still, this new house feels big and lonely, and Slipper feels a bit scared. She needs to muster up the courage to go outside and speak to someone, and befriend so...

The Curious Garden
by Peter Brown

Dynamic author and illustrator Peter Brown creates books that keep young readers enthralled. The Curious Garden is a wonderful tale that will show kids the importance of taking care of the world around us. A young boy named Liam is exploring a dark,...