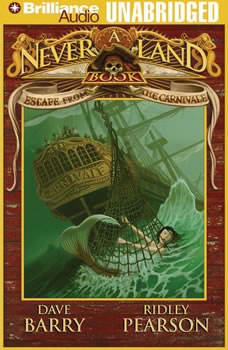 Escape from the Carnivale: A Never Land Adventure

Little Scallop should be happy. She’s a princess of the Mollusk tribe, rulers of beautiful Mollusk Island. And she has two fun friends - Aqua and Surf - who just happen to be mermaids. But Little Scallop is bored. Her warrior brothers are allowed to do exciting things, like spying on the pirates who live on the other side of the island. Little Scallop longs to have a real adventure. When Aqua and Surf invite her to go pearl-diving - even though she knows she shouldn’t - she can’t resist. So late one night, she sneaks off into forbidden waters with Aqua and Surf. That’s when the trouble starts - they run into a fierce storm and a strange ship sailed by men who would love to capture a mermaid. Soon, Little Scallop is caught up in the adventure she always wanted. The question is: can she and her friends get out of it?