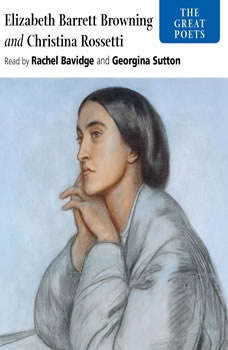 Elizabeth Barrett Browning (1806–1861) and Christina Rossetti (1830–1894) were both regarded as the female poet laureates of their time, and between them their writings spanned almost the entire Victorian age, from the end of Romanticism to the beginnings of Modernism. This selection of their shorter works contains all the major themes that animated them – social justice, faith, love and mortality – and some of the best-loved poetry in English, including In The Deep Midwinter and How Do I Love Thee? These poems reflect the changing world in which they were composed, but they also reflect the complex passions of two extraordinary women.

Poetry for the Winter Season
by Christina Hardyment

In November 2005, hundreds of people submitted recordings of Shakespeare, Wordsworth and Roger McGough in an attempt to win a prize – participation in the recording of this new poetry collection by Christina Hardyment, historian and audio...

Narrator: Read by winners of the Naxos Audiobooks-The Times Voice of the Y
Published: 10/01/2006

John Donne, Andrew Marvell, George Herbert, Thomas Carew and Henry Vaughan: these were some of the 17th-century writers who devised a new form of poetry full of wit, intellect and grace, which we now call Metaphysical poetry. They wrote about their ...