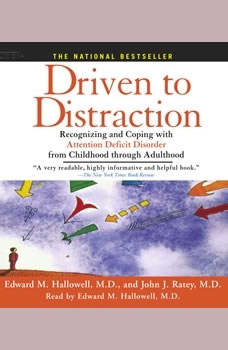 Driven To Distraction: Recognizing and Coping with Attention Deficit Disorder from Childhood Through Adulthood

Procrastination. Disorganization. Distractibility. Millions of adults have long considered these the hallmarks of a lack of self-discipline. But for many, these and other problems in school, at work and in social relationships are actually symptoms of an inborn neurological problem: ADD, or Attention Deficit Disorder. Through vivid stories of their patients' experiences, Drs. Hallowell and Ratey now offer a comprehensive overview of one of the most controversial psychiatric diagnoses of our day. They show the varied forms ADD takes -- and the transforming impact of precise diagnosis and treatment. And, as successful professionals who are both living with ADD, they extend a message of hope and compassion to all listeners struggling with ADD in their own lives or in the lives of loved ones. An enlightening exploration of a condition only recently identified, Driven To Distraction is a must for everyone intrigued by the workings of the human mind.

Social Anxiety Disorder: The Ultimate Practical Solutions To Overcoming Anxiety, Panic Attacks, Depression and Shyness Once And For All
by Kevin Rhodes

Cognitive Behavioral Therapy (CBT): Techniques for Retraining Your Brain and Managing Depression and Anxiety in Just 7 Weeks or Less
by Kevin Rhodes

If you want to overcome anxiety, depression, and negative thoughts once and for all then keep reading...What if I told you that no longer does your life have to be ruled by irrational automatic thoughts that lead to your endless suffering every sing...