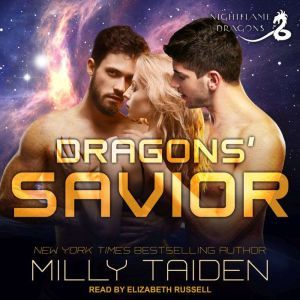 When the courts end Dr. Vanessa Bryant's career, she's contacted by a secret government facility to work as a doctor-on another planet. Having no other option, she agrees. On planet Daeria, she finds her two escorts are sexier than sin. She's going to have problems keeping her hands off them and staying professional. Madden and Kian, dragon-shifters from Daeria, have been closer than brothers all their lives. Sharing one surrogate is more than ideal to them. They are overjoyed with the idea of becoming parents to help repopulate their planet. The problem is their female isn't part of the program. Vanessa is there as a healer, not their surrogate. Plus, not everyone's happy about her presence. In fact, they'd kill to have her gone. When Vanessa disappears, Madden and Kian learn they need to save more than her life alone. It's a race against time to convince her they're her perfect mates and creating a family isn't impossible. Contains mature themes.