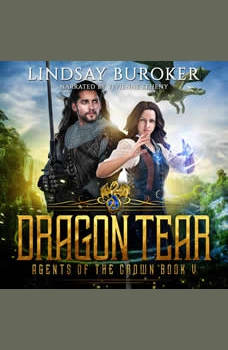 Series: Agents of the Crown

Now that Jev is no longer obligated to marry a manipulative noblewoman, Zenia can finally pursue a relationship with him. But there’s something else she must deal with first. She’s learned that the magical dragon-tear gem she wears around her neck is linked to a living dragon, one that is being held prisoner and tortured.

Zenia owes her life several times over to the creature. She must set aside personal desires and lead a team to the distant and dangerous continent where the dragon is imprisoned.

But it took someone—or something—very powerful to capture such a great creature in the first place. Zenia, Jev, and their friends may not have the magic or might necessary to free their scaled ally. If they fail, the dragon will be enslaved forever by a cruel master, and Zenia and Jev may never see their homeland again.