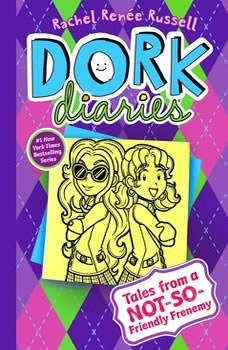 It’s a frenemy showdown in the eleventh installment in the blockbuster #1 New York Times bestselling Dork Diaries series!Nikki Maxwell has the worst luck. Of all the schools she could have been assigned to for the student exchange week program, she’s stuck at North Hampton Hills, her arch nemesis MacKenzie Hollister’s new school. Even worse, there might just be someone at NHH who can out-MacKenzie MacKenzie! At least Nikki can write about every moment of drama in her diary, so listeners won’t miss a moment of it. Can the queen of dorks survive a week at the head CCP’s new school or will it be a dorky disaster?