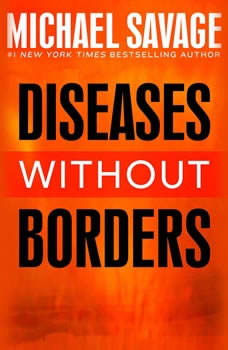 Diseases without Borders: Boosting Your Immunity Against Infectious Diseases from the Flu and Measles to Tuberculosis

New York Times bestselling author and expert in epidemiology Dr. Michael Savage explains the origins of viruses and their impact on the U.S. With new and resurgent diseases resulting from unregulated immigration and a politicized public health system, Michael Savage sees the need for some changes - starting with the President and the Center for Disease Control telling us the truth. Savage makes his case for the government to enforce travel bans, the use of quarantines and the importance of proper border screenings. However, this is not a cure or treatment for any of these diseases. With Zika virus, tuberculosis, hepatitis, Enterovirus 68 and other new disease threats emerging across the U.S., Savage will explain ways to fortify your immune system and defend against these and other diseases. Drawing from his extensive training, Dr. Savage examines the benefits of using specific nutrients to boost the human immune system which, in turn, increases the odds of surviving a viral infection as well as preventing other diseases. Based on his knowledge of the politics of medicine being played by the Obama mandarins and his Ph.D. in Epidemiology and Nutrition from the University of California, Berkley, Dr. Savage presents solid information to protect your health. Whether you want to defend your body against deadly diseases, boost your immunity, or learn more about the government's impact on reemerging and imported diseases, DISEASES WITHOUT BORDERS is your source for informative, helpful, and potentially life-saving advice.

The virus kills nine out of ten of its victims. Its effects are so quick and so gruesome that even biohazard experts are terrified. It is airborne, it is extremely contagious, and it is about to burn through the suburbs of Washington, D.C. Is there ...

The legal history of epidemics shows that, throughout American history, public health laws have been liberal for some communities and authoritarian for others. Epidemics prompt us to make choices about our basic values and our laws, and history help...

The Enemy Within
by Michael Savage

"I pray to God that we will one day return America to her glorious roots of freedom, faith, and family. Yes, this book is about the America that once was, and the America that could be again-if you have the will to stand and fight against the Enemy ...

Corona Virus (COVID-19) is a virus that is part of a large family of viruses known as Coronaviruses (CoV). It is less fatal than SARS or MERS but more fatal than the seasonal flu, with an estimated fatality rate of 1.4% according to studies. However...