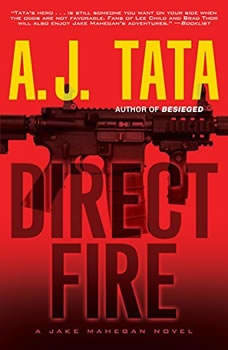 A Publishers Weekly Best Books of 2017 selection“The high-octane action scenes make this a must-read for military thriller fans.” —Publishers WeeklyDirect Fire brings the war on terror to America.A powerful banker, gunned down in cold blood. A military family, senselessly slaughtered as they sleep. A key general, kidnapped from his farm near Fort Bragg. Atrocities like these are all too common in the Middle East. But this is the United States of America . . .Time is running out for Jake Mahegan. Terrorist cells are gathering in the Blue Ridge Mountains. Hackers are emptying the nation’s banks. And their final act of vengeance will bring the whole world to its knees. For Mahegan, it’s time to kill. Now. “Horrific at times, spine-tingling throughout, A.J. Tata once again proves capable of writing a firestorm that’s even scarier because it is all too real. “—Suspense Magazine on Besieged “Tata’s books are absolute rollercoaster rides . . . fun and fascinating reads.” —Mark Greaney, #1 New York Times bestselling author of Tom Clancy Full Force and Effect