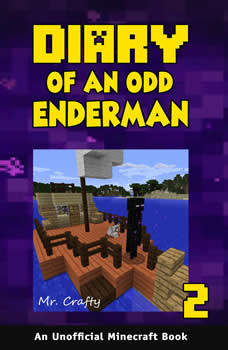 Diary of an Odd Enderman Book 2: An Unofficial Minecraft Book

The Adventure Continues With Your Favorite Enderman!This odd Enderman finally receives an official name that he will forever go by. After escaping a heat-filled environment where his last diary ended, his new adventures have become more thrilling, dangerous, exciting, and there are memories he will hold on to for the rest of his odd life.His missions continue while traveling overseas (watch out for the never-ending water though) to help any villager that can so easily become unnoticed. Teaming up with his best friend and hoping the ocean doesn’t devour them fully, they find a mysterious island filled with haunting situations and creatures that could really use the help of a willing odd Enderman.Disclaimer: This is not an official Minecraft book and is not authorized or owned by Mojang

The Case of the Bicycle Bandit
by James Preller

James Preller's wry, witty, Jigsaw Jones chapter book mysteries are once again available to inspire the next generation of young readers, featuring both new titles and classroom classics! The Case of the Bicycle Bandit Why would anyone steal an old ...

Steve has kept himself quite busy, being the only builder in the world...It's a fact. No matter how hard he has tried in the past, the villagers never catch on. So resigned to being the only one with his incredible, if he does say so himself, skill,...

Timmy Failure: Sanitized for Your Protection
by Stephan Pastis

Some surprising news sends Timmy Failure on a hilarious caper as the New York Times best-selling series continues. Behold! You are all about to be witnesses to greatness. In this fourth volume of Timmy Failure's memoirs, Timmy is forced to hit the r...

Diary of an Odd Enderman Book 1: An Unofficial Minecraft Book
by Mr. Crafty

Why is he so odd? Hmmm?Maybe it's because he looks weird? Or creeps up on you...Enderman feels alone in his dark, cold world.He has heard stories of other enderman traveling to colorful worlds. They come back to share their stories of how the other ...