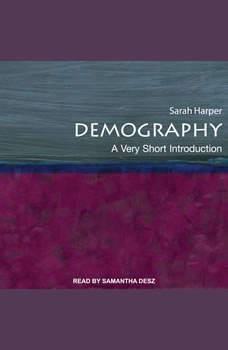 The generation into which each person is born, the demographic composition of that cohort, and its relation to those born at the same time in other places influences not only a person's life chances, but also the economic and political structures within which that life is lived; the person's access to social and natural resources (food, water, education, jobs, sexual partners); and even the length of that person's life. Demography, literally the study of people, addresses the size, distribution, composition, and density of populations, and considers the impact the drivers which mediate these will have on both individual lives and the changing structure of human populations. This Very Short Introduction considers the way in which the global population has evolved over time and space. Sarah Harper discusses the theorists, theories, and methods involved in studying population trends and movements. She then looks at the emergence of new demographic sub-disciplines and addresses some of the future population challenges of the twenty-first century.

Ethiopia and the Origin of Civilization
by John G. Jackson

This essay is an effort to highlight the influence of Ethiopia in the history of Civilization. It also devotes consider time to suggesting that Ethiopia’s contribution has been either misunderstood or intentionally ignored by mainstream histo...

Confessions of an Old Man
by Munir Moon

The future is being stolen from the millennial generation. Baby boomers have much to answer for: a legacy of economic instability, poor job growth, and an environmental disregard. Confessions of an Old Man is a statement of collective guilt that pla...