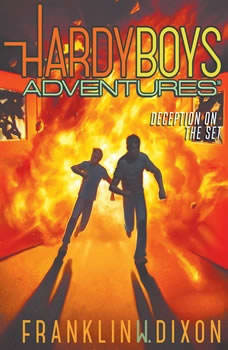 Deception on the Set

Lights! Camera! Sabotage?It does not take much&#160;to convince Frank and Joe to be&#160;extras in the new zombie movie that&rsquo;s filming in Bayport. Not only do they&#160;get a behind-the-scenes glimpse of the magic that goes into making horror&#160;movies, they also get to wear freakishly realistic zombie makeup that makes&#160;them look like the walking dead!But the horror gets a little too real when disaster hits the scene. Equipment fails left and right;a set tumbles down, nearly killing the film&rsquo;s famous lead actress; and a terrifying explosion&#160;threatens the cast and crew. Worst of all, Frank and Joe are targeted as possible suspects. Time&#160;for the Hardys to step up and play the role they know all too well: detectives!